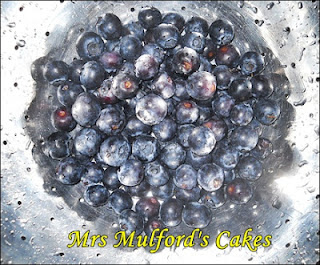 Finding blueberries for this wonderful, moist, dark chocolate cake proved tricky. In fact, I distinctly remember buying at least three boxes of fresh blueberries over the past month. So where did they go and how did I get them into the cake? 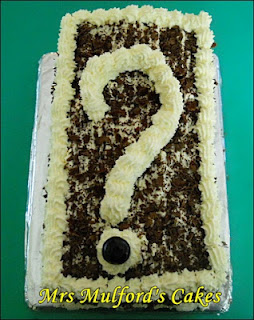 Apologies to anyone who follows me on Twitter; you will know the idea has been with me for awhile. I thought that dark blueberries would look 'hidden' against a dark chocolate sponge not that they would hide from me. 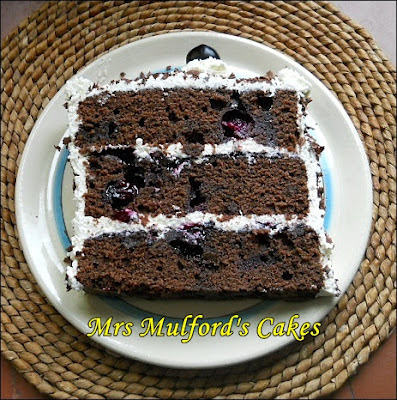 It took all of my detective skills to locate two and then the third box of missing blueberries, eventually. Not quite Sherlock Holmes material but you'd like to know where they were? I had been looking in fridges, freezers, bags, accused children, stores but it wasn't until I went back to the car and had to flip one of the seats up that I found them....a month later..... 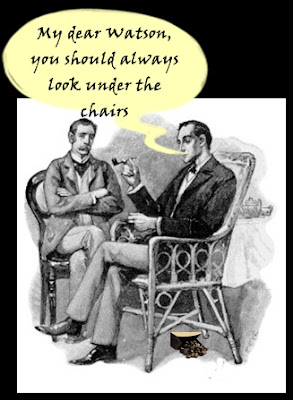 Voilà under the seats, hooked in the mechanism that flips the seat up (Citroen C8 MPV). In my defence, I have six seats in there at the moment so they weren't visible until you did this. Unfortunately, not blue blueberries anymore just very, very white and furry! So, feeling that this was a good place to keep looking, I found the third box of blueberries in the passenger door compartment that I had put there to keep safe, these too were a bit too shrivelled after a week. No excuses for that one really....
But I was determined to make this cake, I love cherries and dark chocolate in Black Forest Gateau, I love apricot and dark chocolate in Sachertorte so my fourth fresh box of blueberries in you go! This cake did not disappoint. The blueberries weren't that hidden in the end but they looked great bursting into bright, fruity dots all over the cake. It looked like it would make a good tray bake as well but I decided to bake this one for a dessert cake. I carried on decorating with two easy fresh cream and conserve layers then, a cream and chocolate finish. Serve with pouring cream. 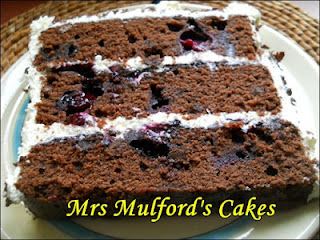 
Cream the sugar and butter together. Mix in the golden syrup. Whisk in the eggs one at a time. Sift the cocoa powder with flour. Fold in the flour and cocoa.
Add yogurt to the mix . Stir in the chocolate chips. Toss the blueberries in flour and stir gently into the mix. Put into a lined tin.
Place in the centre of the oven. Check after 20 minutes. Cook until gently risen and a skewer comes cleanly out.  Allow to cool.   Cake needs to be cold before decorating. You can have this cake as a tray bake now or carry and decorate.
Divide cream equally into two containers ; whip one until very stiff and one until spreadable.
Cut cake into three sections. 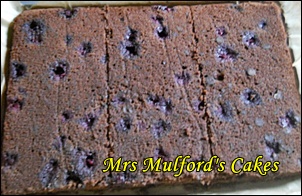 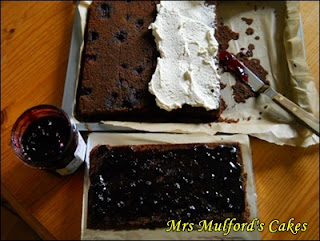 Trim sides. Use spreadable cream for top and sides. 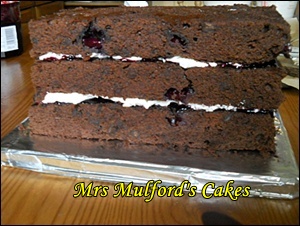 Make light lines over cake using and fork and then flick grated chocolate all over.  Place a piece of grease-proof paper underneath to catch all those chocolate pieces that don't stick the first time. 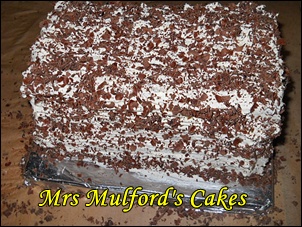 Use the rest of the stiffer cream to pipe decorations round the edges. Use 1 or more blueberries to add as decoration! Slice and enjoy! 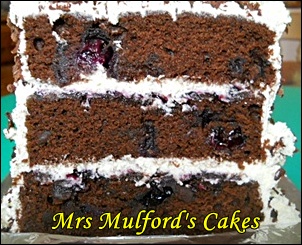 Apart from looking for blueberries I have been busy . 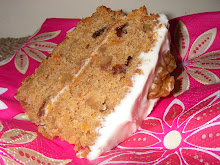 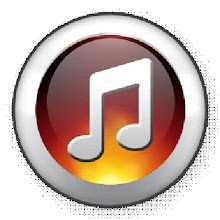